Studio Complex & Hangarrrrrr are two artists’ initiatives that have grown to form one collective, located in two large, neighboring hangars in Enschede, Overijssel. The complex of ateliers is used as an open workshops for artists within which each artist has the freedom to develop their own practice. Furthermore, the initiative is a platform for cultural events, such as Zuiderfestival, exhibitions and concerts. 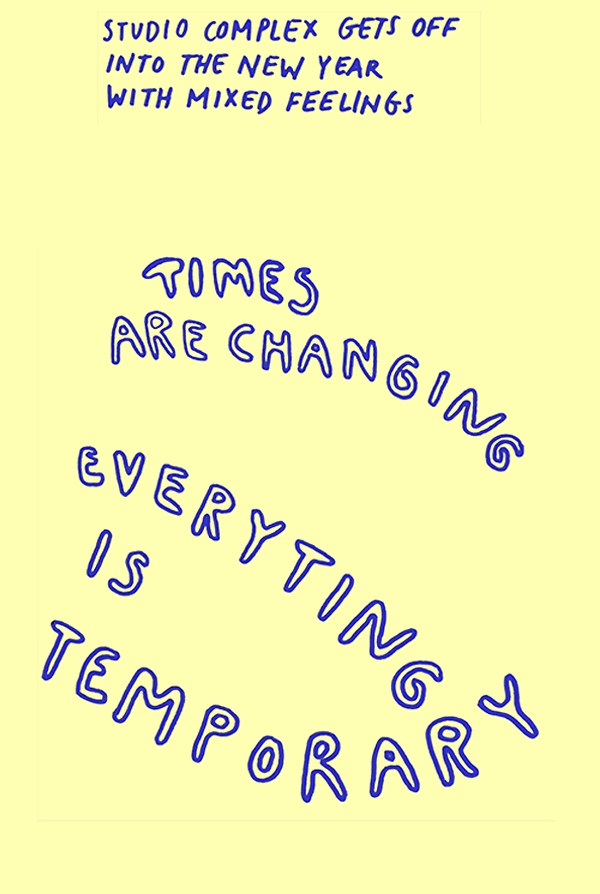 Studio Complex was founded in 2011 by a few enthusiast individuals who had squatted a building on Cromhoffsbleekweg 75 bordering the city centre of Enschede. They had previously been squatting together and run 'the Offmess', a former officers' mess located in a forest on the outskits of Enschede and the 'it's' located in a large building in the city centre, both of which had become freehavens for creative output, particular in their own right and had lasted for several years. They chose to occupy a former car repair shop of about 2500 sqm in size which had been standing empty for several months. Squatting had just been illegalised in October 2010, but the city of Enschede as property owners agreed to sign the use of the building over to 'Tetem Tussentijd', an initiative organising arrangements of interim use of properties established by the local gallery space Tetem. As oppose to common Anti-Squatting companies, 'Tetem Tussentijd' didn't demand a monetary compensation for the use of the building by the creatives. The institution trusted the collective of squatting creatives/ creative squatters to act responsibly. Shortly after the founding of Studio Complex, the city of Enschede contracted Tetem Tussentijd for the neighboring building, Cromhoffsbleekweg 69. The collective 'Hangarrrrrr' formed and after a few years of existing in parallel to Studio Complex, the two collectives fused.

In the coming years Studio Complex & Hangarrrrrr developed to become a colourful, diverse and chaotic free space, a 'broedplaats', a breeding ground for creative energy and activity.

A few 'highlights' of their activities: In October 2011, 'the Loch' was set up by a member of the collective whose practice centres around sound engineering and a friend who had been organising concerts while studying at the Aki, the local art school. The same year, three members of Studio Complex teamed up with a friend to organise the 'Overkill Festival' where visitors could indulge in 48h of alternative computer games and films. Since, the team has grown and organises the festival on an annual basis in different locations all over the city. In 2012, Studio Complex organised the first Zuiderfestival which celebrates DIY culture on a variety of levels and has since become the largest annual event which the collective hosts. In February 2013, Studio Complex organised a group exhibition called 'On the Edge' at Tetem in Enschede. The same year, the group curated an ongoing performance at Twente Biennale in Enschede. In July that year, the collective organised the group show 'Over the Edge' at the Kunstenlab in Deventer. In 2016, a group of friends from and around Studio Complex came together and organised a self-made carnival during that year's Zuiderfestival. They kept developing new attractions and performances and started travelling around the Netherlands to show their absurd playgrounds and perform under the name of 'De Karnival'. , In 2016, the collective was awarded with funding by the national cultural fund 'Mondriaan Fonds' which allowed for the group to extend their activity to a neighboring empty piece of land and, together with the support of the surrounding neighborhoods, Studio Complex set up 'Krakralucha' – a community centred gardening project, artist residency and sculpture garden.

Fast forward to February 2018 – the group now consists of 25 creatives most of whom are artists and makers. Studio Complex has become a creative hub for creatives of all kinds in the city. With its chaotic, yet warm and inviting charme it has become the inspirational home of a young generation of artists, students and musicians in the city. While generally being open to offering workshop access and space for temporary projects, the collective's members have set up their workspaces with varying focusses – textiles and sewing, woodwork, electronics, welding and metal work, photography, plastics, screenprinting, writing and sound.

Having established a healthy professional relationship with representatives of city of Enschede and project developers for the local neighborhood, the collective was informed of its eviction in December 2017. The property of around 5000 sqm is to be developed in the spring and summer of 2018. Since the soil has been polluted by local textile industry in the 1950s and 60s, property developers haven't been interested in the land for some time despite its location on one of the “most important“ roads of Enschede, since development would involve replacing the soil for about 1,5m depth, as representatives of the city government have told Studio Complex in 2016 as they reassured the collective that their stay was more or less secure for another 10 years.

The decision to prepare the property for development has caught Studio Complex by surprise. The city of Enschede set the 1 April as a deadline to vacate the building. Foresters are planned to start cutting the forested area of the property in the beginning of February and finish their work before 1 March to avoid for birds to start nesting which would desturb the plans for developing the area. The buildings of Cromhoffsbleekweg 75 and 69 are to be demolished in the beginning of May.

Recognising the collective's creative potential, the city government has offered another location to the group: the Janninkshallen, a warehouse formerly used by textile industry next to the building of the former headquarters of the local newspaper 'Tubantia', a few meters down the road from Cromhoffsbleekweg. These premises are smaller than the properties of Cromhoffsbleekweg 69 and 75. The building is about two thirds of the size of the current location and its outside area is also considerably smaller. But the city of Enschede is offering this building on the same conditions as before: free of charge and secured until the city makes concrete plans with it, which according to representatives of the city is at least until October, probably longer.

A large part of the collective voted in favour of accepting the city's offer. A few voices had spoken out against it since they felt like it was inacceptable not to resist and struggle for the preservation of Studio Complex as it is now. It's clear that the Janninkshallen won't provide space enough for creating a social space similar to the Loch besides workspaces for the collective's members. Nevertheless, most members of the collective will move to the new location with the aim to set up a new space for artistic freedom and culture and continue to offer DIY culture and creativity to the city of Enschede.

Studio Complex gets off to a start into the new year with nostalgia and euphoria. Times are changing. Everything is temporary and in constant flux.